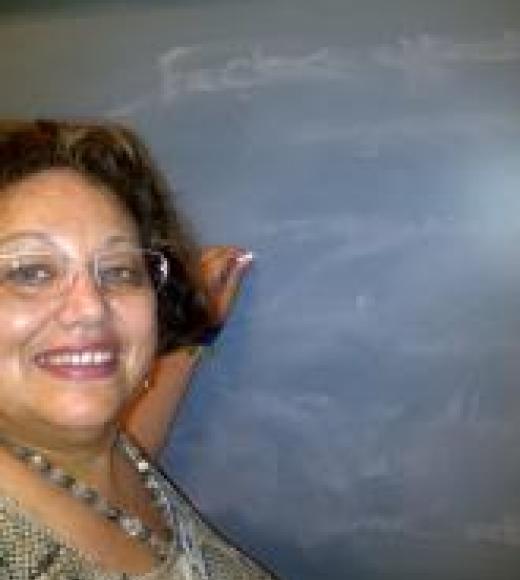 Angie Chabram is a Professor in the Department of Chicana/o Studies.  She is the youngest daughter of Angie Gonzalez Chabram who is originally from El Paso Texas and settled in La Puente.  Professor Chabram was born in 1952 and is the youngest of her family which consists of Rafael Chabran, Yolanda Chabram-Butler, and Richard Chabran.  Her most important influence in life is her mother, "Lita," who was a single parent to four children and insisted that her children obtain an education in parochial and public schools.  Yolanda Chabram-Butler in turn has maintained the strong familial base and cultural legacy that has kept Professor Chabram rooted and connected.  Rafael Chabram is also a strong influence; he took her to UC Berkeley at a young age and later they would complete their doctorates together at UCSD.    Richard Chabran, a fellow student at UC Berkeley,   worked with Professor Chabram at the Chicana/o Studies library.  A lasting and profound influence, he introduced her to cultural studies, cyberculture, and Chicana/o archives.
As a Professor, Chabram's academic training is in Literature,Spanish and Chicana/o criticism.  Her publications include five editions, Speaking from the Body (with Adela de la Torre), The Chicana/o Cultural Studies Reader, The Chicana/o Cultural Studies Forum, Chicana/o Representations, and Chicana/o Latina/o Transnational Movements.  The center of her intellectual work is concentrated on the field of Chicana/o representations, including feminism, cultural theory, and health narratives.  Over the years she has mentored professors and students in the areas of music, film, women's writings, and pop culture.  Her greatest joy comes from documenting Chicana/o knowledge forms, practices of everyday life, culture, and activism. Recently, she published a work called "Curls, Frizz and Locks:  A Latina Hair Story" (Speaking from the Heart)

At UC Davis she is mentoring a cohort of students in undergraduate and graduate research.  For her teaching, research and service are all part of the same mission of cultivating  knowledge and power through educational praxis.  Whether it is in a theater class or in a book that resembles a forum, her motto is always learning by doing and listening.  And "doing" is a two way street, a collaboration, a rich dialogue.  Although Professor Chabram has been here for 20 plus years, for her there is much work to be done, especially in this global period when new forms of multi-culture can be found everywhere and  everyday people have found new venues for speech, culture, and community-building. In many ways her current career interests have been shaped by early family experiences, including train trips on the Southern Pacific from LA to El Paso (where she cultivated the art of conversation), and many rich and enduring platicas with her mother and sister that are not only the spice of life but also her inspiration.